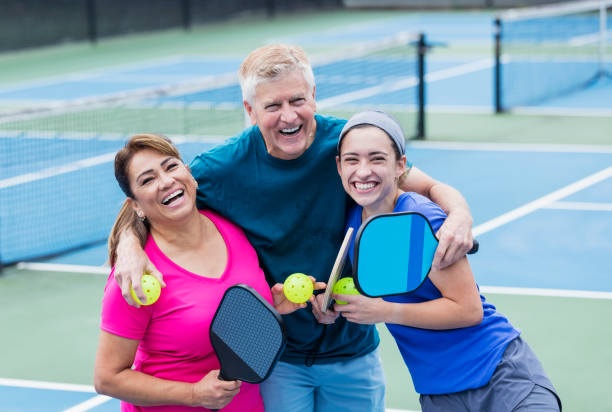 From the sound of paddles smacking that hollow plastic ball to entire tournaments dedicated to it, pickleball has officially hit the big time as the newest sporting hobby to sweep the country. You’ve probably heard about pickleball even if you don’t usually pay attention to sports. Still, you’re probably wondering what this trend is all about anyway. Here’s everything you need to know about the pickleball craze that’s got everyone running outside to play.

What Do You Need To Play?

If you’re itching to get out there and join in a game of pickleball, you don’t need much equipment to get started. All you need to play is a paddle, ball, and net. One of the most attractive things about this game is that the equipment is budget-friendly and easy to carry around. The paddle is smaller than a tennis racket and the ball is lightweight. Even the net is portable, and you can set it up and take it down in just minutes.

With any trending sport, you have to consider quality when you’re acquiring equipment. From Paddletek pickleball paddles to adjustable nets and durable balls, take your time and choose a product that’s right for you.

Where Did It Start?

Pickleball has humble beginnings, and it’s older than you may realize. The sport has actually been around since the late 1960s when three fathers challenged their children to come up with a game using whatever equipment was on hand during their summer vacation in Washington. From there, the sport developed a set of rules and a small but mighty following.

The new obsession with pickleball didn’t start until much more recently. If you’re similar to the majority of the population who only heard of the sport in the last couple of years, then you know that it’s experienced huge growth in a very short time. There isn’t one place in the country you can point to where the new trend started, but where there are outdoor tennis courts, you can find pickleball teams setting up their nets to play.

What Are the Rules?

When you’re starting out with pickleball, you’ll need a basic idea of the rules of the game. If you’ve ever played or watched tennis or table tennis, then the rules of pickleball will come easily to you. The most important concepts have to do with the ball in play, mainly that you have to stay inside the court and serve the ball correctly. Here’s a quick summary:

Why Do People Love It?

The pickleball craze has taken over the country because people really love the sport. If you have ever played it, then you know why. Pickleball is more accessible than tennis, but it’s still played outside, making it more social and better for wellbeing than table tennis.

Pickleball is also very friendly for beginners, and you can make your court on any already-established tennis court. Since so many communities have established parks and courts, it’s easy to find a place to gather and play this unique and exciting game.

Are There Any Professional Teams?

If you’re getting really into the sport and want to follow what the professionals are doing, you will be happy to know that there are professional pickleball teams. Beyond Major League pickleball, there are also minor leagues in various regions and cities. There’s even a world championship for the sport. But when you’re starting out, you can find your local pickleball club on social media.

From picking up a game after work to joining a local pickleball club, there are lots of ways you can get involved in the newest trending sport. Just grab a paddle and a few balls, and other pickleball enthusiasts will welcome you with open arms.

How much can you borrow with a payday loan?