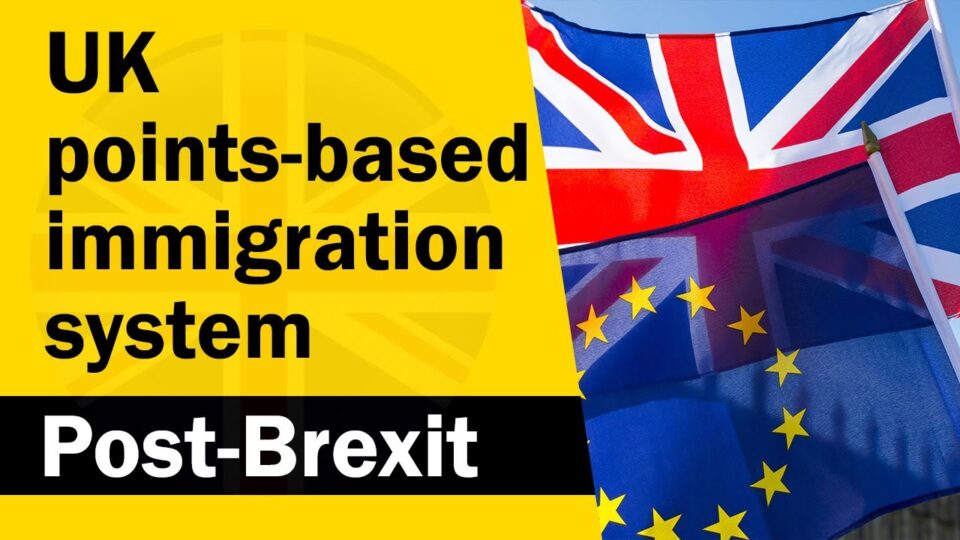 The European Union (EU) free movement has ended as of 31 December 2020 and there are new provisions being initiated for EU citizens. Irish citizens must continue to freely enter, stay, work and depart from the UK.

A new point-based immigration route has opened for applications to work, live and study in the UK. You can apply and pay for your visa online as per your eligibility. When you apply, you will be asked to book and make an appointment for your biometric information, which is fingerprint and photograph to be taken.

Following the Brexit with the new points-based system being actualised, the eligible skilled professionals will now require to secure a minimum of 70 points under the skilled worker route to have their visa granted. However, the assessment would flexible but holds mandatory requirements. At all times, the sponsor license guidance should be strictly adhered to.

Formally known as Tier 2 Sponsor Licence, the sponsor licence is a mandatory licence under the new immigration rules to hire skilled workers from overseas. It imperative that the employer must fulfil all the requirements and comply with Home office rules and regulations on the latest sponsor licence guidance.

The sponsor licence is valid for 4 years and needs to be renewed after every 4 years.

The new points-based system includes a skilled workers route who have a job offer from an authorised UK employer sponsor.

The job you have been offered will need to be at a required skill level of RQF3 or above (equivalent to A level). You must also have the required proficiency in the English language and be paid the relevant salary threshold as provisioned by your UK sponsor. This could either be the general salary threshold of £25,600 or the going rate for your job, whichever is the higher amount.

If you are being paid less than this – but not less than £20,480 – you may still be able to apply by ‘trading’ points on specific grounds against your salary. For example, if you have a job offer in a shortage occupation category or have a PhD in that relevant job field.

There is no particular thumb rule for employers to recruit at or near the minimum wage.

Switching a visa route refers to a migrant’s ability to stay in the UK on a different immigration route without needing to leave the UK and apply from overseas. If the applicants want they can easily switch the visa route to any other route.

Route to Settlement in the UK

Once you have a skilled workers visa you can earn indefinite leave to enter or remain after spending a continuous 5 years period staying and working in the UK.

Later you can also seek to apply for British citizenship. The minimum eligibility requirements of passing the Life in the UK test, bearing a good character, English language proficiency and age above 18 years must be fulfilled.

How to Recruit Engineers and Retain Them

5 Reasons to Have Your Employees Wear Name Tags

Some Amazing Ways to Utilize Presentation Boxes as A Business

Why you should get PMP certification in Amsterdam